Work is an important part of social citizenship and responsibility in the United States. A person’s work confers status and power and contributes to the commonweal. 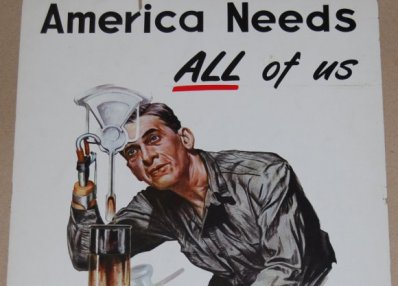 People with disabilities throughout American history have faced difficulties in getting work skills and finding jobs. Sometimes, people could only find work that exploited their physical differences. Such “freak shows” and circuses were popular from the 1840s to the 1960s. Despite discrimination, people with disabilities have worked in every field.

Current statistics from the U.S. Census Bureau and the National Association on Disability illustrate the continuing problem.

$1,961.—Average monthly earnings of people with any kind of disability.

$2,724.—Average monthly earnings of people with no disability.

17.9%--Poverty rate for people with a nonsevere disability.

14.3%-- Poverty rate for people with no disability. 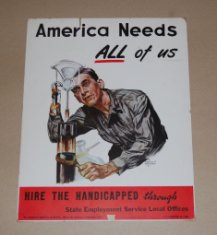 The President’s Committee on Employment of People with Disabilities has had several names since President Truman organized it in 1947. This drawing of a man with a split-hook hand working on a hydraulic gauge has the title “America Needs All of Us.” 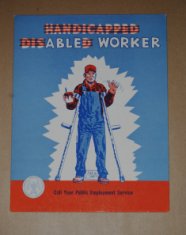 Comic-strip artist Milton Caniff designed this poster of a painter who resembles his Steve Canyon character, in overalls, with a paint can and crutches, and the title “Able Worker.”

President’s Committee on Employment of the Physically Handicapped 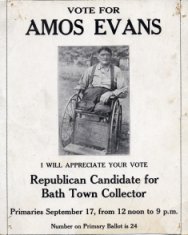 Amos Evans distributed this advertisement with a photo of himself as a double amputee in a wheelchair when he ran for Bath Town Collector.

Dapper Jerry Miller, candidate for Mill Hall county commissioner, used this card with an image of himself seated on a stool, the nude stumps of his amputated legs visible.

Farmer in paddock with horses

This man in hat and suspenders feeds a colt. He has a homemade prosthesis over the pants of his left leg.

Itinerant selling was a common kind of work from the colonial era until well into the 20th century. The satchels and cases hanging over this man’s shoulders free his arms for crutches.

The need to counter pity while acknowledging disability can be difficult to balence. This businessman portrays himself on the phone in his office, seated in a wheelchair, with the caption, “I’m offering a service, not my handicap.”

Farm work sustained families but was also hazardous. This man rides a bull hitched to a wagon full of cotton bales with a woman seated on top. He wears a homemade well-padded prosthesis at the stump of his left leg. 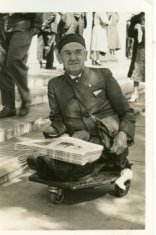 Low and uncertain wages provided a precarious living for many people. This newspaper seller wheeled around on a board, papers on his lap. 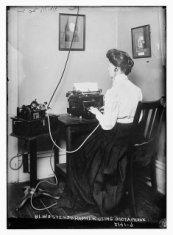 This woman found secretarial work. She typed on a large heavy typewriter while listening to a recorded voice dictating a document.

Courtesy of Library of Congress 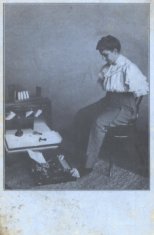 Accommodations in this workplace included a typewriter on the floor and a desk at foot height. A woman in a long skirt and lacy blouse sits on a stool and types a document with her feet because she does not have arms.

Music paid the bills for W. C. Williams, shown in his uniform with guitar, banjo, triangle, drum, bells, and more at his feet.

Although unclear what he is working on with the tray on his lap, Mr. Barnes adapted his wheelchair to support his work. 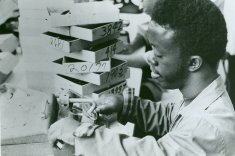 Many people worked on assembly lines because of the repetition and simplicity. This man assembled optical goods. 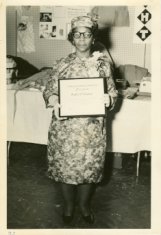 Mattie Vaughn, in gloves, flowered dress, and matching hat, holds her citation for “Educational Work for the Blind.” 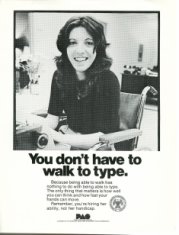 In this magazine ad “You don’t have to walk to type,” a young woman in a wheelchair types at an office desk.

President’s Committee on Employment of the Handicapped 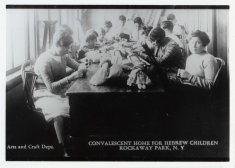 In schools and institutions, students learned basic skills, such as these boys and girls sewing dolls at the Convalescent Home for Hebrew Children. 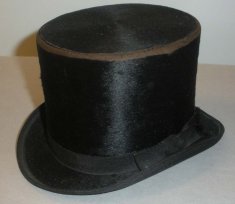 This pale woman wears a low-cut dress with ankle and calf exposed. Her teased white hair appears as a foamy mass.

Side show and circus performer, 8'1'' Buck Nolan stands between a cowboy and cowgirl of typical height. Nolan wears a band uniform and drum major’s hat, making him appear even taller.

This orchestra of little people includes lute and ukulele players and a violinist of typical height. 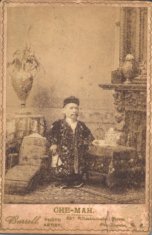 Che-Mah, his hair in a queue and dressed in Asian clothing, worked for Barnum and Bailey’s circus as a “Chinese dwarf.”

Mary and Margaret Gibb sang and played the piano. They exhibited themselves as “American Siamese Twins.”

Charles Decker exhibited himself in dime museums and made a living from his short stature.

In the early 20th century, “midget villages” were popular attractions at amusement parks such as Coney Island, and at world’s fairs. These half-scale towns were real communities for the people brought from all over the world to work there. 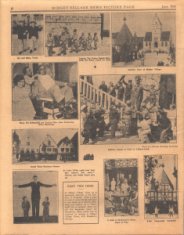 In this photo spread from a newspaper sold to promote tourism at a Midget Village attraction, people of short stature perform Gulliver’s Travels and go about their daily lives.