Medical technology has had complicated consequences for people with disabilities. 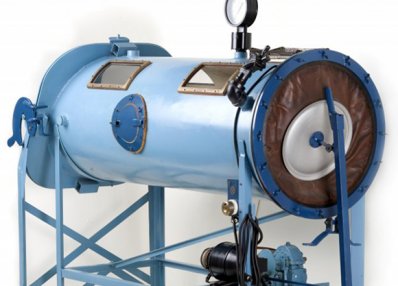 Developments in diagnosis and treatment have improved both the quality and length of life. Medical technologies have ameliorated conditions, saved lives, and counter-balanced impairments. They also have created new conditions and exacerbated existing ones, as well as overtaken the lives and identities of people who rely upon medical interventions. A person may be known or identified by others primarily by a medical condition. In the 1950s, Thalidomide given to pregnant women to relieve morning sickness resulted in children born with anomalies.

Disease epidemics, such as polio and HIV, upset established communities and sometimes resulted in widespread disability. The German measles (rubella) epidemics of the 1960s were responsible for many children with deafness.

Incubators were invented in the 1880s. They were such a novelty that the devices, along with live infants, were displayed at the 1893 Columbian Exposition in Chicago, the 1901 Buffalo Exposition; from 1903 to the 1940s, Coney Island hosted an incubator show. Neonatal units became standard in hospitals in the 1940s. 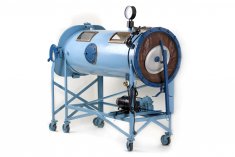 Iron lung with large light blue cylinder to fit an adult, mounted about three feet high on casters, a portal for head on one end and bellows on the other, electrical motor on base, weighing 750 pounds, 1931 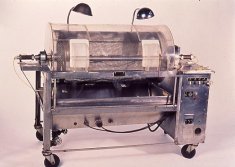 When the kidneys are unable to clean impurities from the blood, it can be done artificially with a machine like this. Invented in the 1940s by Willem Kolff, this machine is large and weighs several hundred pounds. It has a filtering cylinder, heat lamps, and wheels. 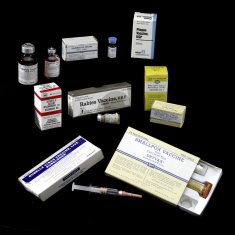 A range of vaccines prevent many of the diseases that formerly killed or disabled children and adults. Pictured here are vials and boxes for plague, rabies, polio, influenza, hepatitis B, rubella, anthrax, smallpox, and typhus. 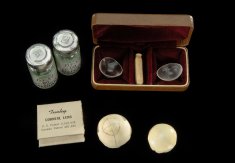 The first contact lenses were large, thick, and made of glass. Shown here are a case with plastic scleral lenses with a suction cup for removing them, molds for fitting scleral lenses, and packages with the small, plastic corneal lenses familiar today. 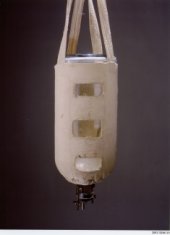 Understanding of the need and process for supplying nutrition intravenously saved many lives. This is one of the first drip bottles, made of glass and suspended in a linen sling so gravity helps the fluid along. 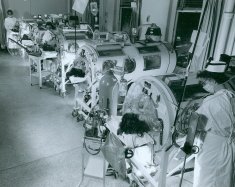 Polio produced a range of medical responses, including new rehabilitation and orthotic techniques. The people in these iron lungs use the machines to make their lungs breathe because the virus destroyed respiratory muscle cells. 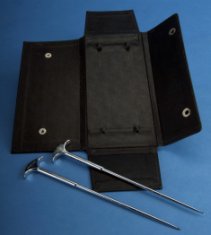 This black leather case holds two pointed steel rods that a doctor would insert behind the eye and destroy the prefrontal lobe of the brain. Doctors treated unruly or depressed patients by lobotomy from the 1950s to the 1970s. 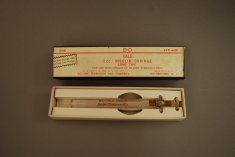 Insulin is used to treat diabetes. Untreated diabetes can produce complications such as vision loss, poor circulation, nerve damage, and kidney disease, and lead to amputation. 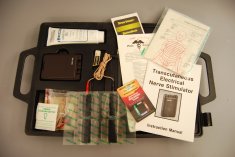 People use transcutaneous electrical nerve stimulation (TENS) for pain control. This case has manuals, electrodes, stimulator, and gel for the pads.

Invented in the 1880s, incubators were such a novelty that the devices, along with live infants, were displayed at the 1893 World’s Columbian Exposition and the 1901 Buffalo Exposition. From 1903 to 1943, Coney Island hosted an incubator show. Neonatal units became standard in hospitals in the 1940s.

In the United States, polio was the most notorious disease of the 20th century until AIDS appeared. On April 12, 1955, it was announced that Jonas Salk, using March of Dimes donations from millions of people, had developed a vaccine to prevent polio.