Each advance in public conveyance has had the potential for exclusion. 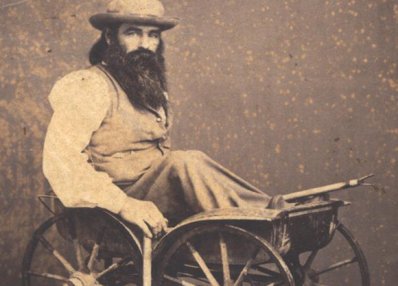 For example, wheelchairs, an old mobility technology, were not compatible with either city streets or public transportation. Paved streets and sidewalks in the 20th century helped. Curb cuts and ramps began appearing in the 1950s. They gained legal backing under the 1968 Architectural Barriers Act and the 1990 Americans with Disabilities Act (ADA), as did the inclusion of lifts on buses and the removal of architectural barriers in public buildings.

To circumvent barriers, people frequently made their own devices or adapted existing ones to their liking. This man with a bushy beard and bowler hat sits in a cart with four buggy wheels large enough to raise it a few feet off the ground. He has poles for pushing himself along.

Unpaved streets, rutted roads, manure piles, and debris made traveling even short distances difficult or impossible. This house sits on a hilltop, beside a makeshift wooden walk along a dirt street. 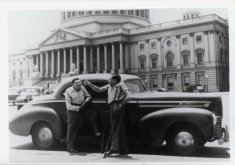 Government worker Ben Minowitz poses with a buddy and his car behind the United States Capitol building. Minowitz had had polio and used crutches and, later in life, a wheelchair. 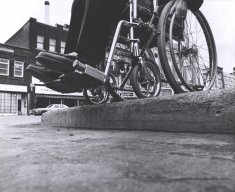 Before the 1968 Architectural Barriers Act and the 1990 Americans with Disability Act, there was no legal obligation to create accessible environments. 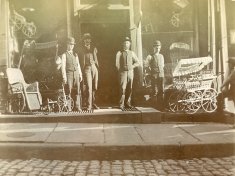 Four shop clerks in vests and hats stand in front of a store that sells wheelchairs, baby buggies, and bicycles. The street is paved with square stone Belgian blocks. 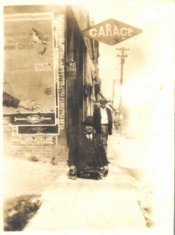 This man travels the sidewalk on a low wheeled board. Hand weights provide propulsion and save his knuckles. He wears a suit and hat and smokes a pipe. 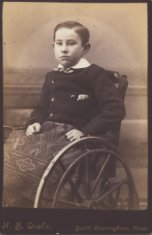 A well-groomed boy with a lap blanket sits in a wheelchair. The handrail indicates he pushed himself. 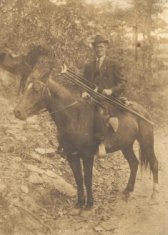 This man in a suit and hat carried the crutches he used when on the ground. His left leg has been amputated. 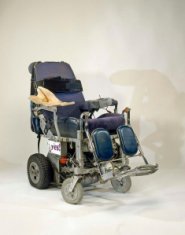 Disability rights activist Ed Roberts used this custom-made chair. It had go-cart wheels, a joy stick for finger operation, and a headlight. 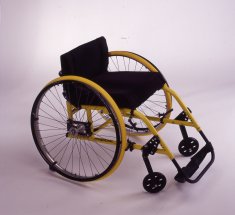 The Quickie was one of the first “ultralight” designs that revolutionized chair mobility in the early 1980s. Before this, wheelchairs were primarily for use inside and usually required assistance. Their weight and bulk quickly tired the user. Ultralight designs also led to more competitive sports action.

The white cane is a mobility device and a powerful symbol of independence. First passed in the 1930s, white cane ordinances protected visually impaired pedestrians. This gold-headed cane belonged to Kenneth Jernigan, president of the National Federation of the Blind from 1968 to 1986. The NFB was founded in 1940 by activists who themselves were blind or had low vision.

Help students understand how polio affected the lives of Americans throughout the 20th century.