Home / Disability and History / Who Is Normal?
Main Conent

Concepts of beauty and comeliness can influence how people are valued and treated. 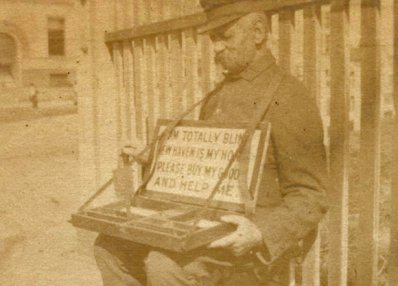 The way people judged a person’s appearance was different when physical injury, crooked teeth and cavities, smallpox marks, and other scarring commonly affected people. People with such bodies were fairly normal.  Then in the mid-1800s, some cities began to ban certain people from public streets. These so-called Ugly Laws were directed at people with disabilities who sometimes depended on begging for a livelihood.

“Any person who is diseased, maimed, mutilated, or in any way deformed so as to be an unsightly or disgusting object, or an improper person to be allowed in or on the streets, highways, thoroughfares or public places in the City of County of San Francisco, shall not therein or thereon expose himself or herself to public view.”  —San Francisco “Ugly Law,” 1867 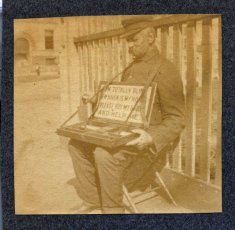 Man on street selling items from a box, not dated

This man, seated on folding stool, sells items from the open box on his lap. His hand-written sign reads “I am totally blind. New Haven is my home. Please buy my goods and help me.”